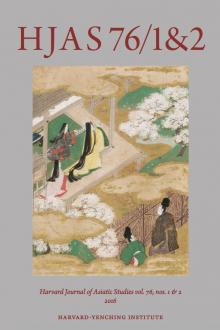 The Tale of Genji (Genji monogatari 源氏物語) is a classic of world literature. Japanese readers have been fascinated by the novel since Murasaki Shikibu 紫式部, a lady-in-waiting at the imperial court, completed it during the first decade of the eleventh century. The peak of premodern interest in Genji came during the late fifteenth and early sixteenth centuries, when the tale dominated the cultural lives not only of court elites but also of warriors who aspired to cultural distinction. Genji was everywhere during that time—in readings, lectures, discussions, plays, calligraphic inscriptions, and paintings.

The cover image for this issue is a product of the late medieval culture of Genji. Sue Saburō 陶三郎, a leading retainer of the influential Ōuchi 大内 warrior house, commissioned the work now known as the Harvard Genji Album. Completed in 1510, the album originally comprised fifty-four paintings by Tosa Mitsunobu 土佐光信 (1434–1525), one for each of the novel’s chapters. (One of Mitsunobu’s paintings was lost and has been replaced in the extant album by another artist’s work.) Each painting is paired with a textual excerpt by a prominent calligrapher. The image here illustrates the moment in the fifth chapter, “Young Murasaki” (Wakamurasaki 若紫), when Genji first espies Murasaki—the young girl in the center of the image—whom he adopts as his ward and later marries.

HJAS thanks the Harvard University Art Museums for their kind permission to reproduce the image.

Manhood Rituals in The Tale of Genji

“The Rites” (Minori) chapter presents a pivotal event in The Tale of Genji: the death of Genji’s most beloved wife, Murasaki no Ue. In analyzing this scene, I focus on how her death magnifies melancholic attachment to strengthen ties between the bereaved male protagonists. Loss of this stunning woman lures two generations of men into a spell of deathbed fellowship. After Murasaki has died, Genji and his son, Yûgiri, together gaze at her cadaver. Such intimate viewing represents not only an instance of unchecked voyeurism but also signifies a pedagogical exercise in which beholding a dead female body fosters homosocial communion. This act stages a paternal object lesson in how to mourn and earn manhood through rituals of lurid staring. In tracing how dominative desires to look, grieve, and teach transpire in the scene, I argue that Murasaki’s flawless corpse fuels patriarchal inheritance.

This article examines narrative depictions of the bizarre and often confounding transformation of inanimate copper coins, gold pieces, and silver ingots into human form. Stories of money’s transformations appear across a range of medieval and late imperial genres, from classical anecdotes and vernacular tales to northern and southern dramatic forms. In each of these traditions, the body of the animate money becomes a site for the articulation of changing understandings of value and meaning. By tracing the embodiment of money from the Six Dynasties to the Qing, this article illuminates the shifting imagination of money from object to subject, in which the increasing identification of self and silver becomes a source not of anxiety but of agency.

Online library catalog records of Chinese texts written during the late imperial period contain a wealth of traditional bibliographic information. Nearly 35,000 records on texts written from 1550 to 1799, available through WorldCat, describe these works in minute detail: the size of a page’s text frame, the number of characters per page, print quality, genre, and so on. Aggregating this bibliographic information allows for a rapid and statistically rigorous approach to quantitative print history. Diachronic analysis of the size of the text frame of the late imperial texts represented by these records reveals a rapid increase in the production of very small format texts during the latter part of the eighteenth century. When integrated with information on genre, this analysis confirms Robert Hegel’s hypothesis that novels were printed in ever smaller formats during the Qing dynasty and traces the origin of this trend to the 1750s.

China’s Gate to the Indian Ocean

Iranian and Arab merchants were among the first long-distance traders who sailed from the Persian Gulf to China. Many settled in Guangzhou or other coastal cities, establishing diaspora communities in an efficient maritime trade network, at a time when Chinese merchants were not yet actively sailing overseas. Here, I collect and comparatively analyze both textual and archaeological sources to reassess the role of Iranian and Arab merchants in initiating China’s expansion of long-distance overseas maritime commerce. Local kilns, for example, were already producing ceramics for Middle Eastern markets during the Tang. I also show evidence that attests to a much more active role of the Tang court in Sino-Arab relations than has hitherto been assumed. But corruption in local management of maritime trade and political conflicts also had far-reaching consequences on the presence of Iranian and Arab merchants in Guangzhou and the functioning of their networks.

Government by Mourning: Death and Political Integration in Japan 1603–1912, by Atsuko Hirai.

The Stranger and the Chinese Moral Imagination, by Haiyan Lee.

The Proletarian Wave: Literature and Leftist Culture in Colonial Korea, 1910–1945, by Sunyoung Park.

Modernity with a Cold War Face: Reimagining the Nation in Chinese Literature across the 1949 Divide, by Xiaojue Wang.