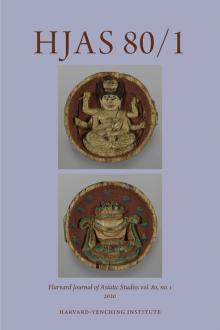 On the cover of this issue of the Harvard Journal of Asiatic Studies is a tiny circular shrine, barely three centimeters in diameter, with a sculpture of the Esoteric Wisdom King Aizen Myōō 愛染明王, also known as the Lust-Drenched King. The shrine was one of more than seventy dedicatory objects placed inside a small statue of Prince Shōtoku 聖徳太子 (574–622), who is known as the father of Buddhism in Japan. The statue, Shōtoku Taishi at Age Two, is commonly known as the Sedgwick Shōtoku, after Ellery Sedgwick, the owner and editor of the Atlantic Monthly, who bought the statue from a Japanese art dealer in 1936. Prince Shōtoku is the subject of countless legends about his life and religious works; the Harvard statue represents one of them. At the age of two, the prince “faced toward the east, placed his hands together in prayer, and uttered his first words of homage to the Buddha. Miraculously, at that very moment a tiny vessel appeared in his hands containing a relic of the Buddha Śākyamuni, his left eye to be precise.”1

The Sedgwick Shōtoku dates to around 1292, as do the artifacts within. There are two small carvings of Aizen Myōō among the texts and other articles discovered within the statue’s interior cavity. Aizen (known in Sanskrit as Rāgarāja) belongs to the class of beings that protect the faithful and subdue evil—in this case by eliminating the obstructions to spiritual enlightenment presented by vulgar love. The presence of two sculptures of Aizen suggests that whoever commissioned the Sedgwick Shōtoku had a close connection to the monk Eison’s 叡尊 (1201–1290) reformist Shingon-Ritsu 真言律 movement, for Aizen was Eison’s personal deity.2 The cover image shows, on the top, Aizen with weapons in his many hands and a bell and thunderbolt directly in front of his body. On the bottom is the shrine’s lid, carved with an urn filled with cosmic jewels. Presumably, the diminutive shrine was intended to be carried on the person.

A Monk for All Seasons

Jien’s familial connection to the highest echelons of state bureaucracy ensured his rapid rise and fall within the Tendai Buddhist establishment, illustrating his duality as cleric and worldly politician. Yet the divided portrait of Jien refracted by different academic disciplines obscures Jien’s life and motivations. Using materials written by and about him, I examine Jien’s rise to prominence, his connection to the power centers of his day, his role as a spiritual authority, his investiture of land and positions to his disciples, and his often-ignored role as a prophetic visionary to paint a more holistic picture of his life. I argue that Jien held a consistent spiritually infused worldview most visible during a confrontation with his former sovereign, Retired Emperor Gotoba, on the eve of the Jōkyū War (1221). I argue we can only understand that confrontation by reconciling his political interests and his religious faith.

In early 1942, a poetry exchange about a painting on the ancient assassin Jing Ke took place among top collaborators at Nanjing. Chinese cultural memory of Jing Ke, long contested, shifted in the twentieth century, making him into a Republican and national hero, eventually symbolizing resistance against Japan. Thus, these poems, especially considering their Japanese readership, show that although cultural memory can be evoked as a legitimizing discourse to serve political needs, its plasticity gives it versatility. Wang’s own iconography as assassin, central in constructing the legitimacy of his regime, was a floating symbol that assumed varying meanings in different contexts. It simultaneously justified collaboration, assuming that Japan’s pan-Asianism would usher in a new unified Qin empire, and also resistance, assuming Wang Jingwei’s perceived readiness to make a personal sacrifice to save the nation.

Industry and Its Motivations

Civil-service examination candidates in Ming and Qing China often encountered “small-topic” essay questions, which required them to restrict their analysis to a small fragment of a canonical text rather than a longer, coherent passage. Tang Xianzu’s (1550–1616) “The Woman Would Have Excess Cloth” is one such essay. I argue that this essay goes well beyond the original passage of the Mengzi from which the topic was drawn: it proposes that the ability to exchange one’s excess production on the market is appropriate motivation for an individual to continue to produce. Beginning from the specific case of the woman whose weaving exceeds the needs of her own household, Tang alludes as well to the written work engaged in by literati, framing the sale of cloth and the exchange of letters and prefaces as ethical means of sustaining the motivation on which social discipline is grounded.

I examine the impact of Xinxue (the study of the mind), whose most celebrated teacher was Wang Yangming, not as that of a philosophical or quasi-religious movement, but as a body of editorial practices to be situated among other sixteenth-century textual practices. In the twentieth century, Chuanxi lu (Instructions for practical living) has been read for philosophical content, a category that would have been alien to its sixteenth-century creators. Examining what the editors and compilers of the prefaces and postfaces of Chuanxi lu and Wang Wencheng gong quanshu (Complete works of Wang Yangming) have to say about the construction of these texts, I posit that the content of Xinxue’s teachings—especially, “knowledge and action are one”—cannot be dissociated from the agency of editors in producing these texts.

Material Culture and Fashion in Tang China and Beyond

Footbinding in Economic Context: Rethinking the Problems of Affect and the Prurient Gaze

Goddess on the Frontier: Religion, Ethnicity, and Gender in Southwest China by Megan Bryson

A Revolutionary Artist of Tibet: Khyentse Chenmo of Gongkar by David P. Jackson

The Mongols and the Islamic World: From Conquest to Conversion by Peter Jackson

Genshin’s Ōjōyōshū and the Construction of Pure Land Discourse in Heian Japan by Robert F. Rhodes

Naming the Local: Medicine, Language, and Identity in Korea since the Fifteenth Century by Soyoung Suh

The Art of Being Governed: Everyday Politics in Late Imperial China by Michael Szonyi

The Origins of the Chinese Nation: Song China and the Forging of an East Asian World Order by Nicolas Tackett