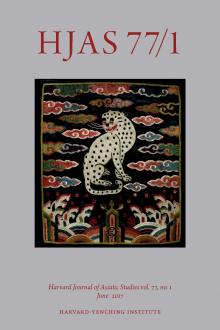 Chosŏn Korea (1392–1910) is to the tributary system what the nematode is to developmental biology: a model organism studied in the expectation that insights into its workings will translate into other contexts. If only Chosŏn were as accommodating a model as Caenorhabditis elegans. It exercised too much agency to fit the ideal type of a loyal and plastic vassal state—so much, in fact, as to cast doubt on the ideal itself. Nevertheless, it is true that Chosŏn drew heavily from the stock of Ming and Qing institutions, practices, and ideas, even as it adapted them to its own circumstances and needs.

The image on the cover is an example of a Korean adaptation of a Chinese model. It is a rank badge (hyungbae 胸背) from the nineteenth century. Often called “mandarin squares” in the West, such insignia were sewn onto officials’ surcoats as a mark of rank. Civil officials wore badges with representations of volant animals, such as cranes, while military officials’ badges bore images of tigers, leopards, and other fierce beasts. Chosŏn first borrowed this system of rank badges from the Ming in 1454, but the rules governing their use evolved during the succeeding centuries. According to guidelines codified in 1871, but likely put into place earlier, single animals represented low ranks, while pairs embellished the badges of high-ranking officials. Thus, the solitary leopard—actually, a “cloud tiger” (unho 雲虎)—on the badge shown here belonged to a military officer of low to middling court rank.1 HJAS thanks the Harvard Art Museums for their kind permission to reproduce the image and H. H. Kang for his research assistance.

The Contemporary Context of the Chinese Tributary System

A large body of scholarship in Political Science suggests that the material power of a dominant state is critical for the stabilization of international order. Consequently, the relative decline of the United States and the ascendance of China raise concerns regarding the stability of the current international system. By contrast, culturalist accounts such as David Kang’s East Asia before the West submit that a stable order can be based on a shared cultural framework rather than material force. Despite their many contributions, the methodological design of such analyses—Kang’s included—do not allow us to attribute Chinese hegemony in the tributary system primarily to cultural factors. Examining the salience of cultural factors for international order requires a different research design that incorporates greater variation across history and regions and that recognizes the multivocality of imperial claims to authority.

Me, Myself, and My Hegemony

The Work of Making the Chinese World Order a Reality

The Tributary System and the Persistence of Late Victorian Knowledge

China is China, Not the Non-West

David Kang’s explanation for the peace and stability in East Asia that continued from the fourteenth to nineteenth centuries positions itself against mainstream understandings of world order in the field of International Relations, which derive exclusively from the experience of the West. However, Kang’s own explanations and theories remain worryingly Eurocentric and are profoundly mimetic of the very approaches he seeks to go beyond. The implications of this Eurocentrism for epistemic and physical violence against ethnic minorities, indigenous peoples, and various others in border-zone areas—in both the West and the East—are dire and merit explicit attention.

Struggling with Nature and the State: The Chinese People and the Yellow River

A Cultural History of Translation in Early Modern Japan, by Rebekah Clements.

Excavating the Afterlife: The Archaeology of Early Chinese Religion, by Guolong Lai.

Negotiated Power: The State, Elites, and Local Governance in Twelfth- to Fourteenth-Century China, by Sukhee Lee.

The Knowledge of Nature and the Nature of Knowledge in Early Modern Japan, by Federico Marcon.

The Chaos and Cosmos of Kurosawa Tokiko: One Woman’s Transit from Tokugawa to Meiji Japan, by Laura Nenzi.

The Undiscovered Country: Text, Translation, and Modernity in the Work of Yanagita Kunio, by Melek Ortabasi.

The Lyrical in Epic Time: Modern Chinese Intellectuals and Artists Through the 1949 Crisis, by David Der-wei Wang.