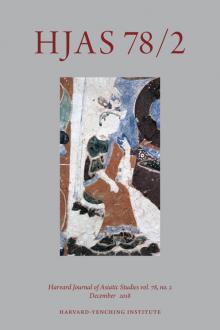 Gracing the cover of this issue of the Harvard Journal of Asiatic Studies is Queen Māyā, the Buddha’s mother. She took a star turn around the end of the sixth century among Chinese Buddhists, who venerated her as a symbol of fertility and safe childbirth, cosmic motherhood, and spiritual rebirth. Her life story reflected these qualities. She conceived the Buddha when a white elephant entered her side during a dream and delivered the child painlessly from under her right arm. Seven days after giving birth, she died and ascended to heaven, where the Buddha visited to lecture her at the time of his nirvana. The mural from which the image here was taken presents a stylized view of the nirvana scene. It is on the ceiling of Cave 280 at Mogao 莫高, Gansu Province, and dates to the Sui dynasty (581–618).1 Reflecting the queen’s popularity, a number of similar scenes can be found among the forty-five thousand square meters of murals in Mogao’s network of 492 grottoes.

Mogao “represents the great achievement of Buddhist art from the 4th to the 14th century.”2 It is one of only a handful of places to fulfill all six of UNESCO’s cultural criteria for inclusion on its list of World Heritage sites.3 It lies to southeast of the Dunhuang 敦煌 oasis, which once served as China’s gateway to the Silk Road. Perhaps even more than for its wealth of artistic treasures, stunning as they are, the site is renowned for the Dunhuang manuscripts, a cache of about sixty-thousand documents dating from the fifth to eleventh centuries. Mostly Buddhist and mostly in Chinese, the cache included the oldest surviving printed book (a copy of the Diamond Sutra, dated 868, now held at the British Library) and texts in languages ranging from Sanskrit and Tibetan to Hebrew and Sogdian on a wealth of topics religious and secular.

The Dunhuang manuscripts were sealed in the so-called Library Cave until their discovery in 1900 by Wang Yuanlu 王圓簶, a Daoist priest who had taken on himself the charge of protecting the Mogao Caves. Before long, Aurel Stein, Paul Pelliot, and other Orientalists and adventurers from western Europe, Japan, Russia, and the United States came to the site to buy and expropriate texts, resulting eventually in the dispersal of the documents around the world.4 The International Dunhuang Project , based at the British Library, is now digitizing the entire collection and making it freely available to researchers.5 HJAS thanks the Harvard Fine Arts Library for its kind permission to reprint the image.

1. See Sonya S. Lee, Surviving Nirvana: Death of the Buddha in Chinese Visual Culture (Hong Kong: Hong Kong University Press, 2010), pp. 94–99, for a discussion of Queen Māyā, including a short description of the mural from which the cover image was taken.

3. International Council on Monuments and Sites (ICOMOS), “Outstanding Universal Value: Compendium on Standards for the Inscription of Cultural Properties on the World Heritage List,” p. 18, in UNESCO World Heritage Committee, Convention Concerning the Protection of the World Cultural and Natural Heritage, WHC-08/32.COM/9, p. 21 (May 22, 2008), http://whc.unesco.org/archive/2008/whc08-32com-9e.pdf.

4. Peter Hopkirk, Foreign Devils on the Silk Road: The Search for the Lost Treasures of Central Asia (London: John Murray, 1980).

History, Temporality, and the Interdynastic Experience

In this article, I examine the place of second-generation “remnant subjects” in the struggle to reconstruct Han literati collective identity following the traumatic Ming–Qing transition. The work of one such figure—Yu Binshuo (d. 1722), son of the better-known Yu Huai (1616–1696)—can be read as a response to inherited cultural trauma. Temporally removed from the Ming past, Yu’s Survey of the Ancient Sites of Jinling presents a subtly different kind of engagement with Ming cultural heritage than works of the eyewitness generation, yet Yu’s reimagining of Nanjing’s spatial order represents a discursive coping strategy that attempts to reclaim subjectivity in a time of loss. Understanding that loss as cultural trauma—a threat to both past and future identity—helps us to make sense of people’s experience of the extended cultural transition from Ming to Qing, as well as the operation and transmission of trauma more generally.

As medieval shogunate officials sought to project their influence outward over the land as well as in competition with one another, classical Chinese scholarship served as an important means of demonstrating cultural attainment and justifying authority. Despite the political and economic power of these figures, neither the texts themselves nor instruction in them were necessarily immediately accessible. I examine the reception of Chinese literary and philosophical texts in thirteenth-century Kamakura, reconstructing the modes of reproduction specific to such works within the larger medieval textual sphere. Analyzing paratextual features of one 1280 manuscript of the anthology Wenxuanindicates the institutional forces that slowed the efforts of eastern elites to replicate the cultural capacities of Kyoto. Such extant manuscripts provide the necessary evidence for a holistic analysis of medieval Japanese textual culture, revealing its network of circulation in the midst of historic changes.

Embryology, Embodiment, and the Ends of Figurative Imagery in Chinese Buddhism

Nurturing the embryo of sagehood was a widespread trope in premodern Chinese Buddhism. From its inception in the fifth-century apocryphal Sutra of Benevolent Kings, medieval Chinese Buddhist exegetes, Chan Buddhists, and Daoist inner alchemists all used this trope as both a metaphor for enlightenment and a metaphysical figure of supernatural embodiment—sometimes within the same textual passage. This trope’s historical use reveals an overlooked commitment on the part of many Chinese Buddhist thinkers to the notion that liberation entails the conception, gestation, and birth of supernatural bodies. The case of the embryo of sagehood demonstrates the capacity of figurative language to move fluidly across the boundaries of metaphor and metaphysics, a capacity I argue was a constitutive feature of premodern Chinese Buddhist soteriology.

“I Write Therefore I Am”

Scholarship usually accords early Chinese scribes little respect. The common perception is that they were nothing but low-level bureaucrats who carried out menial tasks in early imperial administration. But scribes saw themselves differently. Through an in-depth analysis of received literature and archaeological finds unearthed from the tombs of scribes, I argue that being a scribe was not only a privilege but also a matter of great pride to the individuals allowed to enter this profession. The fact that a significant number of tombs from the late fifth century BCE through the early first century CE yielded administrative and legal manuscripts in close proximity to writing utensils shows that literacy was the most crucial aspect of their identity. Their writing skills informed a sense of self that even extended into the afterlife.

In the Parlor with The Cambridge History of China

Another Look Seaward: New Scholarship on Maritime China in the Ming and Qing Periods

The Intellectual in Modern Chinese History by Timothy Cheek

The Economic History of China: From Antiquity to the Nineteenth Century by Richard von Glahn

Network of Knowledge: Western Science and the Tokugawa Information Revolution by Terrence Jackson

Geo-Narratives of a Filial Son: The Paintings and Travel Diaries of Huang Xiangjian (1609–1673) by Elizabeth Kindall

The Rural Modern: Reconstructing the Self and State in Republican China by Kate Merkel-Hess

Young China: National Rejuvenation and the Bildungsroman, 1900–1959 by Mingwei Song

Right Thoughts at the Last Moment: Buddhism and Deathbed Practices in Early Medieval Japan by Jacqueline I. Stone