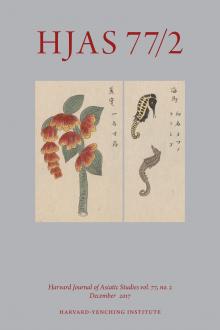 The bananas and seahorses that adorn the cover are two of the dozens of colorful illustrations in Chūzan bussankō 中山物産考 (ca. 1769), a description of the geography, flora, and fauna of the Ryukyu Kingdom (modern Okinawa) in the Harvard- Yenching Library’s rare book collection. The author, Tamura Ransui 田村藍水 (1718–1776), was an Edo-born doctor and naturalist who rose to prominence as a key figure in the Tokugawa shogunate’s successful effort to produce ginseng domestically from seeds smuggled from Korea. He wrote extensively on ginseng and other plants with economic value, such as sweet potatoes and cotton.

Zhao Xuemin 趙學敏, the subject of He Bian’s article in this issue, knew and wrote about many of the plants and animals featured in Chūzan bussankō. There is no reason to believe he was familiar with the work. Rather, both he and Ransui were participants in a lively transnational, even global, discourse on natural history that attracted scholars and policymakers interested in materia medica and other useful products.

In his account of Ryukyu, Ransui drew heavily on Zhongshan chuanxin lu 中山傳信錄 (1721), a survey of Ryukyuan geography and institutions by Xu Baoguang 徐葆光 (1671–1723), a Qing official who had traveled to Ryukyu in 1719. Xu’s book was widely read as an authoritative source of information on Ryukyu. A kanbun 漢文 edition printed in Kyoto circulated among Japanese scholars, and a partial translation into French by the Jesuit Antoine Gaubil informed European readers about the kingdom.¹ Much of the text of Chūzan bussankō, including the descriptions of bananas and seahorses, is lifted straight from Xu Baoguang’s work, but the illustrations are all Ransui’s additions. In addition, he composed his own text to accompany images of plants and animals that Xu had overlooked. HJAS thanks the Harvard-Yenching Library for its kind permission to reproduce the images.

Bencao gangmu shiyi (Supplement to Systematic Materia Medica) has been recognized as the most outstanding sequel to the sixteenth-century encyclopedia Bencao gangmu, adding over nine hundred drugs to Li Shizhen’s magnum opus. In this article, I investigate the key conditions that rendered it possible for its author, Zhao Xuemin (fl. 1753–1803), to access the textual, empirical, and material resources necessary to accomplish such a feat. I argue that despite Zhao’s efforts to frame his work in a classical light, his humble status as a sojourning private secretary in fact enabled him to derive new knowledge from both elite and lowbrow circles. Zhao and his interlocutors represent an expanding, if oft-neglected community of knowledge, who embraced literary documentation of contemporary experience as a way of transcending the accomplishments of previous authorities. Their existence signifies the beginning of a transition from a literati-dominated culture toward mass society.

Monuments and Mandalas in Medieval Kyoto

Reading Buddhist Kingship in the Urban Plan of Ashikaga Yoshimitsu

Kyoto’s urban landscape was transformed during the late fourteenth century through the ambitious building projects of the shogun Ashikaga Yoshimitsu (1358–1408). By examining these projects, I identify a grand urban vision indicative of monumental aspirations. The creation of palaces and temples helped Yoshimitsu infiltrate and eventually dominate warrior, imperial, and religious spheres of influence in Kyoto. More important, the findings suggest the shogun leveraged the allusive power of architecture and urban planning to forge an anthropocosmic connection between himself and the divine. I suggest that Yoshimitsu—like his counterparts in the premodern Buddhist centers of Angkor, Bagan, and Borobudur—sought to transform Japan’s medieval capital into an expression of sacred geography, thereby legitimizing the Kyoto court at a time of imperial schism and advancing his own aim of attaining a status synonymous with dharma king.

Court-Sponsored Qing Lexicography and Its Subversion in Korea and Japan

The Manchu language studies of the Qing empire emerged in Beijing during the late seventeenth century and spread to Chosŏn Korea and Tokugawa Japan during the eighteenth century. The Qing court sponsored the compilation of multilingual thesauri and thereby created an imperial linguistic order with Manchu at the center and vernacular Chinese, or Mandarin, in a subordinate position. Chosŏn and Tokugawa scholars, by contrast, usually placed Mandarin—not Manchu, Korean, or Japanese—as the leading language in the new multilingual thesauri they compiled on the basis of Qing works. I show how the balance between Manchu and Mandarin changed as Korean and Japanese scholars reworked lexicographic books from Beijing. The lexicographic evidence demonstrates that the international languages of pre-twentieth-century East Asia included Manchu and vernacular Mandarin as well as literary Chinese.

Responsibility and Judgment in Nanjing and Hiroshima

Political theorist Hannah Arendt (1906–1975) wrote little on Asia, but her 1963 Eichmann in Jerusalem: A Report on the Banality of Evil suggests how she might have evaluated responsibility for and judgment of war crimes in East Asia. I speculate first about how she might have regarded the 1946–1948 International Military Tribunal for the Far East, and I argue that she would have approved of the executions of those ruled culpable for the Rape of Nanjing while contesting much of the moral and legal thinking that led to them. Second, Arendt’s endorsement of the literary imagination as a tool for judgment allows us to read Hotta Yoshie’s 1963 A-bomb novel Judgment to explore how justice might have been served in the wake of the wartime use of nuclear weapons.

The Return of Seduction

Gender and the Public Sphere in Modernizing East Asia

Tea in China: A Religious and Cultural History, by James A. Benn; The Rise of Tea Culture in China: The Invention of the Individual, by Bret Hinsch.

Real and Imagined: The Peak of Gold in Heian Japan, by Heather Blair.

Ancient China and the Yue: Perceptions and Identities on the Southern Frontier, c. 400 BCE–50 CE, by Erica Fox Brindley.

The Art of Medicine in Early China: The Ancient and Medieval Origins of a Modern Archive, by Miranda Brown.

City of Virtues: Nanjing in an Age of Utopian Visions, by Chuck Wooldridge.

The Chinese Political Novel: Migration of a World Genre, by Catherine Vance Yeh.